I did not relax at my first AA meeting until the main share began. I felt exposed and vulnerable and was scared that if anyone spoke to me that I would be found out as the terrible human being I believed I was and would be unceremoniously turfed out by the ear and told not to come back, ever.

Hearing my first table was a revelation. I felt relief and hope followed by disappointment and anger. The relief came from the identification I got when I heard someone else share about how their life had been ruined by drink. The hope emerged when I saw and heard how their life had changed and thought that perhaps all was not lost for me.

The disappointment and anger came when I heard the words “Higher Power” and saw the word ‘God’ on the scrolls. There was the catch. There was the bar. I was not going to be permitted a new life after all as I had turned away from my childhood religion decades before.

I was incredibly upset and spoke to an AA member later. I wanted, so desperately, what was on offer but in no circumstance was I going back to church again. I was done with organised religion years before.

What happened next was how I ‘Came to believe...’ Firstly, I was told that the 12 Step Programme was spiritual in nature. It was not about religion. Secondly, I was told I had to stop thinking that I was God and thirdly, I was invited to choose my own conception of God. At this point a scrap of paper was slid across the table to me in the homeless flat I was living in and I was encouraged to write two words to describe a God of my own making. I wrote those two words down and my journey of recovery began.

This issue of Roundabout is filled with articles about how other AA members ‘Came to believe...’ 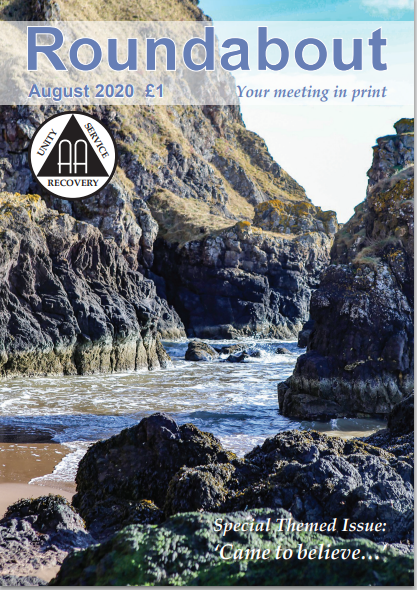 5 Article From The Roundabout Archives

7 The Seed Was Planted

9 The Voice In My Head

21 That Was The Week That Was

I've heard it said that there are three phases to the phrase 'Came To Believe'.

The Voice In My Head

We've all been to hell, our own hell.

Do you have a question? Please use the Helpdesk form to submit your query to the AA support team.